Speech of H.E. the SG at the conference on “Cultural Rapprochement between the Muslim World & the United States of America” 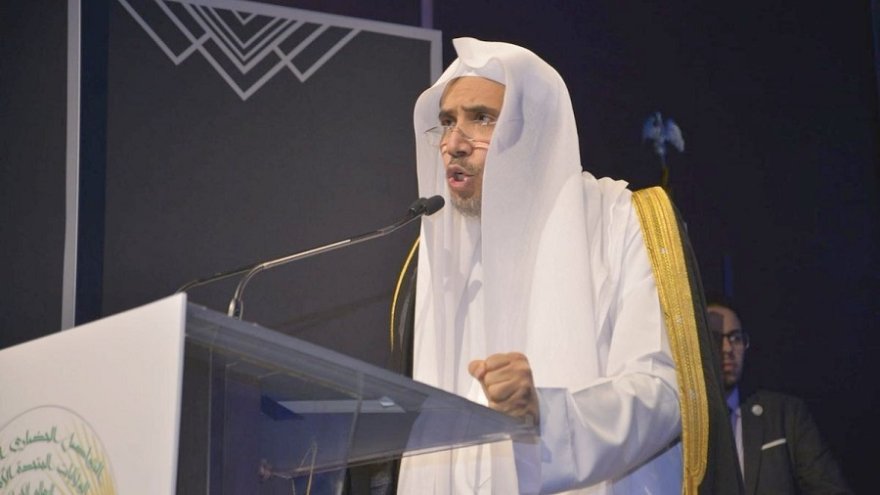 Peace be upon you,

We are pleased to meet you today in our second year to discuss new and important themes of this great conference, in which we are honored to share with international prominent and influential personalities of the three revealed faiths. We also have the honor of the attendance of key intellectual and political figures of various orientations.

We also realize that there is no civilization immune of any impurities that are not part of its substance. Extremism and Islamophobia seek to stick those impurities to its records. However, the integrity of logic refuses but to put things into perspective. History is a witness and a juror to this integrity.

We have said and still saying today that great religions are not extreme by nature; and at the same time, there is no religion that is free of extremists. These, believe that they solely are privileged with the absolute truth. They have further reached the miserable state of belief that anyone disagreeing with them is an enemy of the Creator. Thus, they decided to hate, accuse anyone and sundry with apostasy, and fight the entire world. They believe that they will someday conquer the universe and establish the state of terrorism on the bodies of everyone else. In an intricate intellectual decline, they try to market their interpretations and allegations in shocking procedures.

On the other hand, this subterfuge has revealed the level of extremist slander on religious texts when it distorted their meanings; through the testimony of the true religious creed, which represents the general and predominant condition that believes in its sacred texts and understands its human meanings. God, in His creative way, has fashioned the design of nature and imbued it with beauty and benefit to help sustain man’s life and his happiness on earth. On the other hand there are elements in religion that could be employed negatively which will cause them to diverted from its natural path and will lead to man’s own destruction. The holy Quran has warned about those who will follow the ill path for the sake of creating unrest and evil.

Extremism has tried to mobilize novice religious people , taking advantage of a long period of leniency in spreading awareness despite signs of early warnings of attempts to hijack the true religion, specifically through poisoning the minds of some young people with the idea of clash of civilizations, and embedding the overstated idea of conspiracy and the lies uncovered within their contexts. And this is precisely what extremism has done when, among few of its bets, made a wager on the slogans of Islamophobia in order to take over the minds of more young people saying: "The campaigns of Islamophobia talked about a fact ignored by youth. We must charge them with reality and jihadist enthusiasm to confront this conspiracy and fight the battle of history between two camps; it must be a decisive epic battle” (end of quote). This is the theory of the terrorist proposition, based on the risks of counter-extremism or Islamophobia.

The question is, when this terrorist message was promoted; how was it dealt with back then? We will be frank when we say there was not enough preventive measures set in place in a timely manner. Everybody bears the responsibility for the consequences. Thus, Muslim and non-Muslim world communities were obligated to spread awareness, and call for civilizational rapprochement required according to shared values and common interests, in addition to the advancement of the concept of human brotherhood that calls for reinforcing the feelings of love, cooperation, and understanding the Almighty God’s wisdom in differences, diversity and multiplicity, that evil and foolishness had turned it into an inevitable ground of conflict and clash.

Then, we can go into a tense discussion and arguments on this subject only to say: If there was a real dangerous conspiracy as imagined by a deluded minds, then the teachings of the Almighty Creator, in all the laws of heavens, urge for forgiveness and pardon and the softening of hearts, and to deal with all in nice manners and high morals. These are after all the inherent attributes of all prophets of God, and they are of course, the characteristics of wise and rational people.  The truth of the matter is there is no conspiracy far worse and more dangerous than to deprive humanity from meeting around their shared values and to coexist in harmony among each other, except for the pretext of those illusions.

The Muslim World League has confirmed through its historical documentation that the origin of religions was never the cause of the clash of civilization events, except through forcing and misinterpretation, and the attempts of deceitful claims on religious texts. However, the real reason for all this has to do with political and material ambitions, racist tendencies, fake religiosity and the myth of a cultural barrier. We say this with our due and full faith in respecting cultural privacy and our appreciation for the culture of the other.

Yes, indeed, this was not originally a religious clash, because sage men do not impose religion and because the correct religiosity understands God’s will in differences. An irrefutable proof to this is the prevailing state of harmony and coexistence between Muslims and Christians of the East throughout the history of Islam. They were all equal in rights, duties and freedoms. Faced with their powerful positive harmony, extremist attempts throughout history, as we have mentioned- no religion, creed, time and place were spared their onslaught, yet, all have dissolved into oblivion. Therefore, the migration of Christians of the East to the West is precisely equivalent to the migration of Muslims of the East to the West. For the rare incidents which the voices of hatred are trying to magnify; these were exceptional cases outside the context in each case.

The MWL also calls for the task of adopting curricula dealing with commonality, humanistic cooperation, and developing the skills of free thinking in children and young people. The latter shouldn’t be alienated from their surroundings and their world. This will require preventing any method aiming at having private schools keeping them away from the society they live in. It is also their right to take subjects related to their religious, cultural and linguistic identity through extra-curricular activities which do not lead to their isolation from their milieu. A study made by the Rabita stated that this alienation creates psychological, religious and cultural schism with its protracted negativism that will affect national allegiance and harm the country that has welcomed them with open arms and doors, carried its citizenship and pledged loyalty to it. This doesn’t mean, in any way, the rejection of religious character; what we really mean is that this isolation shouldn’t lead to enmity towards the (adopted) country of residence.

We all know that there are Muslims who sacrificed their lives for the sake of their non-Muslim countries, fulfilling their national duties for which they have dedicated themselves to as basic requirement of their true national colors. And, there are scientists, politicians, academics, professionals and others who have made great contributions in building their adopted countries, and realized their prosperity. Those, enjoy great trust, respect and the pride of their homelands, while, at the same time keeping their religious identity intact.

It is also important to prevent all methods of incitement and contempt against religions and cultures, for such measure, shouldn’t be interpreted as a tool of curtailing the freedom of opinion. The chance to express own convictions and ideas must be available to all, but within logic and without harmful methods such as inflammatory and racist practices.

Many of the causes of the clashes of civilizations were due to historical events that are obsolete today... Peoples have asked their Creator about them and their perpetrators. The Almighty replied in Sura Al-Baqarah, verse 134: “That was a people that have passed away. They shall reap the fruit of what they did, and you of what you do! Of their merits, there is no question in your case!” This is a closure of a door to prevent recalling the repercussions of the past, many of which resulted from material reasons, and some of which were clad falsely with religious tones. There is no one who will be held accountable for his actions based on the religion of God except the infallible Prophets.

Therefore, we declare; No, for the imposition of cultures, beliefs and convictions. No, for the prosecution of beliefs, for God alone will judge them on the Day of Judgment. No, for bidding on and dealing in rights. No, for diligent speaking or behaving on actions in the Name of the Creator, hence the infallibility of man ended with the end of Prophets.

It is important to muster support for the fundamentals of civilized communication through the positive application of religious common denominators, which work on converging views to clarify truth and enhance interchange and cooperation.

In the meantime, and within the spirit of this cultural rapprochement on all its positive tracks, we hope as everyone does, that there will be a just and comprehensive solution to the Palestinian cause at the table of wisdom and logic, away from the bidding slogans by the axes of evil, extremism and terrorism. It is they who have tried to pass their agenda with false clamors to this cause. We should also keep away from inflexible stance to the just solution. God willing, we are sure to find an answer, when this cause will find its way again to the negotiating table devoid of any agenda other than the logic of right and justice.

We are fully aware that this won’t be achieved through infighting and arguments, and not by listening to extremist voices that stand only on sharp edges.

In order to contribute to resolve this issue, the Rabita hopes that the conference participants to recommend preparing a convoy of independent peace messengers; I would like to stress "independent" of any political affiliation. This convoy should represent the three religions to visit all the holy places in Jerusalem to dialogue sage people to support any project or initiative that will contribute to settling this crisis. The crisis, with its overloaded file cannot be tackled except through great men with the logical wisdom, influential strength of justice, who possess a cunning to expose deception and stratagem, and specifically to own the ability to convince the parties concerned of the futility of their harsh positions and their objection to a just and fair result, won’t generate any solution to any issue. It is after all the right of everyone to live in close proximity of a rationale which represents a just and comprehensive peace.

We appreciate your participation and your attention. Peace be onto you. 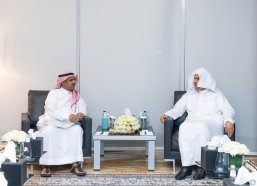 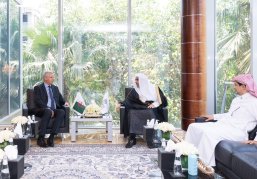