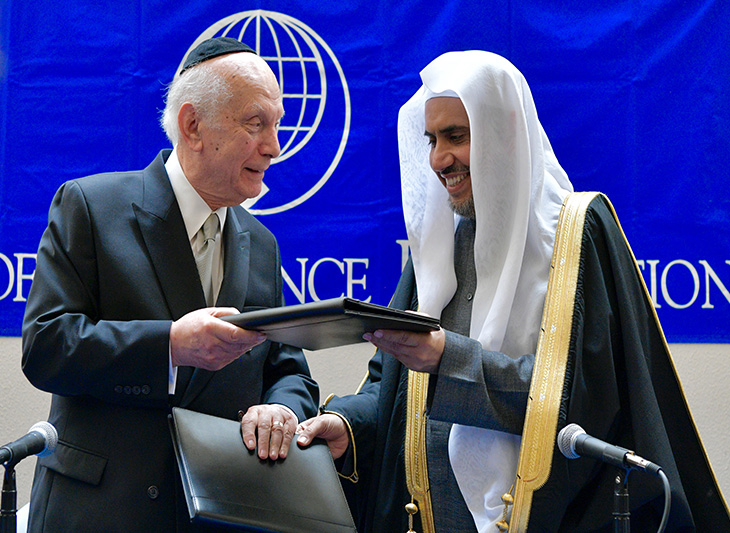 NEW YORK, April 29, 2019 – His Excellency, Dr. Mohammad Abdulkarim Al-Issa, the Secretary General of the Muslim World League, and Rabbi Arthur Schneier, the Founder and President of the Appeal of Conscience Foundation and Senior Rabbi of Park East Synagogue on Monday signed an agreement to unite their efforts for the protection of religious sites around the world.

The agreement was reached after Dr. Al-Issa visited Rabbi Schneier and his congregation at the New York synagogue. It was the first such trip to a Jewish house of worship in the United States by a head of the MWL, a non-governmental organization based in the holy city of Makkah, Saudi Arabia, representing the interests of the world’s Muslims. The visit came directly after Dr. Al-Issa met separately with His Eminence, Timothy Cardinal Dolan, the Archbishop of New York, at his private residence adjacent to St. Patrick’s Cathedral.

The agreement between the MWL and the Appeal of Conscience Foundation focuses on how leaders of the two faiths can work together to prevent threats or violence against religious sites and worshippers as recently witnessed during Passover at the Chabad of Poway Synagogue near San Diego, California, at multiple churches on Easter Sunday in Sri Lanka, the Al Noor Mosque and the Linwood Islamic Centre in Christchurch, New Zealand, and the Tree of Life Synagogue in Pittsburgh, Pennsylvania.

“Houses of worship must be sanctuaries of peace,” said Dr. Al-Issa, who last year visited the Holocaust Memorial Museum in Washington and has become the foremost voice for moderation and interreligious cooperation in the Islamic world.

“No one should be killed for daring only to pray,” Dr. Al-Issa added. “No one should be threatened for expressing his or her beliefs. We must work together to fight for the protection of worshippers anywhere, whatever their creed.”

The agreement, signed Monday before religious leaders of major faith communities and congregants of the Park East Synagogue, directs the MWL and the Appeal of Conscience Foundation to build stronger institutional bonds that can serve as a model for the promotion of peace, diversity and interreligious harmony. The two bodies pledged to explore joint efforts to elevate the level of advocacy for the protection of religious sites, regardless of the religion or creed.

Dr. Al-Issa and Rabbi Arthur Schneier also called on all people, nations and leaders, as well as educators and scholars, to reject violence, hate speech and inflammatory rhetoric of any kind that is committed in the name of God or Truth.

“People should not have to risk their lives when going to pray in churches, mosques, synagogues or temples,” said Rabbi Arthur Schneier. “We call on all peoples, nations and their religious and political leaders to work for the protection of all religious sites as places essential to our common humanity, and the preservation of faiths and cultures. We call on religious leaders, educators and scholars to condemn violence committed in the name of God. A crime committed in the name of religion is the greatest crime against religion.”

Dr. Al-Issa has served as secretary general of the MWL since 2017. His various interreligious initiatives include a historic meeting with His Holiness Pope Francis, and a cooperation agreement with the Vatican.

Later this week, Dr. Al-Issa and Bawa Jain, the Secretary General of the World Council will collaborate on hosting the inaugural Responsible Leaders Summit at the United Nations. More than 100 leaders from business, politics and religion to seek actionable answers for problems plaguing the planet.

Rabbi Schneier’s interfaith leadership roles have included being an ambassador to the U.N. Alliance of Civilizations and an appointee of President Bill Clinton to religious freedom negotiations with China. He received the Presidential Citizens Medal from President Clinton for “his service as an international envoy for four administrations and as a Holocaust survivor, devoting a lifetime to overcoming forces of hatred and intolerance.” He received the Department of State Special Recognition Award for his ecumenical work in favor of mutual understanding and peace. The United States Senate honored him for his half- century of work on behalf of religious freedom and interreligious cooperation.

In addition to Dr. Al-Issa, Park East Synagogue in 2008 hosted Pope Benedict for the first papal visit to a U.S. synagogue. Founded in 1890, the synagogue is a landmark New York City house of worship and among the nation’s leading modern Orthodox congregations. 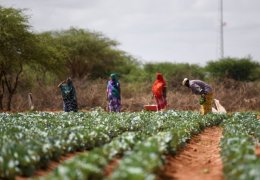 The Muslim World League congratulates the Islamic world on the blessed Eid AlAdha, "May God make it a good and blessed Eid for all"

Join our call for zero tolerance for hate speech. Sign the petition

View The Charter of Makkah